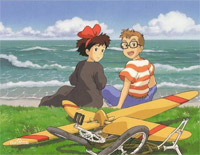 Meguru Kisetsu Meguru Kisetsu&nbsp;(めぐる季節 Changing Seasons) is an insert song of Kikis Delivery Service which is a 1989 Japanese animated fantasy film produced, written, and directed by Hayao Miyazaki.&nbsp;The film tells the story of a young witch, Kiki, who moves to a new town and uses her flying ability to earn a living. According to Miyazaki, the movie portrays the gulf between independence and reliance in teenage Japanese girls.&nbsp; &nbsp; Meguru Kisetsu is composed by Joe Hisaishi who is a composer and director known for over 100 film scores and solo albums dating back to 1981. And it was sung by&nbsp;Japanese singer Azumi Inoue.